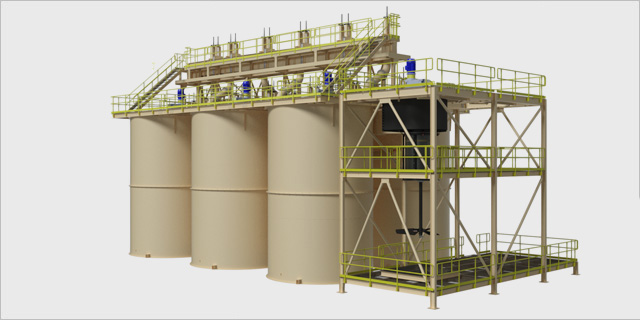 
The Pumpcell circuit is a process route used for CIP or RIP applications.

The Pumpcell represents a new approach to the design of conventional cascade CIP adsorption circuits. The Pumpcell is in essence a complete CIP plant incorporating a Pumpcell mechanism and launder system enabling the carousel mode of operation to be employed. The carousel mode of operation involves keeping the carbon as a discreet batch within each contactor and rotating the pulp feed and discharge positions.

The pulp feed and discharge positions are rotated in such a manner that the counter current movement of carbon relative to pulp is simulated without physically having to pump carbon through the circuit. The benefit associated with carousel mode of operation is that backmixing associated with conventional counter current CIP circuits is eliminated.

Coupled to the carousel configuration, the Pumpcell design and operating philosophy is based on the fact that the circuit is operated at increased carbon concentrations and reduced residence time relative to conventional counter current CIP circuits.

The design of the Pumpcell circuit allows all contactors to be placed at the same elevation, in contrast to the stepped arrangement used for conventional cascade CIP adsorption plants. Furthermore, the potential capital and operating cost benefits coupled with the operational advantages of a carousel Pumpcell circuit is considered to offer an attractive alternative to the conventional cascade CIP process.